Agriculture, Urbanisation, Wetland and Forestry Management alongside Climate Change are the cause in a significant drop in the health and state of UK nature and wildlife. The State of Nature 2016 report published today describing the UK as “among the most nature-depleted countries in the world”

The 2016 Report led by the RSPB and the collaborative effort of over 50 conservation organisations details the dramatic decline in nature as a result of climate change “overwhelming negative” agriculture, industrialisation and urbanisation, pointing out that it is not just historical but continues today.

The report highlights the positive efforts with examples of natural habitat and wildlife recovery but sadly points out there are too few to prevent a tipping point, citing how public funding for biodiversity has decreased by a third over the last 7 years.

Of particular interest, relating to the current surge of interest of nature within the health, wellbeing and biophilic agendas, and recognition of biophilia and rewilding as the secret sauce for sustainability, is the report’s Connection to Nature Index. 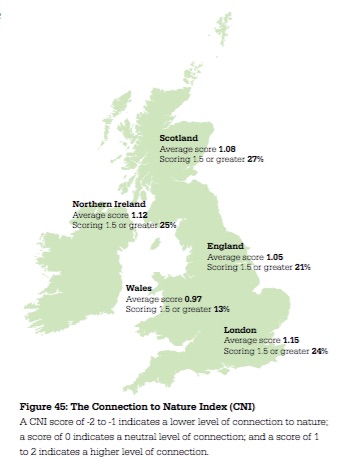