Many have written, blogged and commented on the avoidable tragedy at Grenfell Tower. I have been in two minds whether to add my voice, but then as a colleague pointed out, I have been blogging on themes pertinent to the tragedy since 2007. Theses themes (on risk, collaborative working, health sustainability, standards, strategies,  and construction improvement) have featured in this and other blogs, in numerous articles across many journals and of course brought together within the recently published FutuREstorative.

No doubt, in boardrooms across the world of built environment organisations, questions are being asked: have we designed, specified or installed similar materials and systems in similar situations. Do we really know? Do we know the materials, chemicals and the impacts of insulation we have installed? Where are the inspection and audit results, where are the material test certificates and evidence of compliance with specifications.

We do not know the exact cause and failures at Grenfell, but what has become clear is that this a systematic failure, a cocktail of failures and certainly not just a single cause.

Back in my biz improvement / safety advisory role in the 90’s, we used the swiss cheese model for a systematic thinking approach to risk. In the swiss cheese model each slice of cheese is seen as a system activity or aspect layer, holes in individual layer may be problematic but other layers act as a defence to prevent more significant failure.

But when too many holes line up we see a catastrophic system collapse event.  As sadly we have seen at Grenfell Tower.

Grenfell Tower will undoubtedly have a profound and highly significant impact on design, construction and building management worldwide, but we do not need to wait for an inquiry when we know the problems, the holes in the myriad of swiss cheese layers, and we know what needs to be fixed.

deregulation and desire to have a legislation bonfire
slow response by government to head lessons learnt
lobbyist pressure to affect change
a fashion for ignoring experts
partial privatisation of the building inspection regime
fragmented supply chain
inappropriate materials or systems
lack of system thinking
a lowest cost mentality that still persists
passive fire strategies
material testing in isolation, not as a system
lack of transparency and impact knowledge of materials we specific, approve, install
ignorance of precautionary principle thinking
lack of collaborative working
failure to question – the “we can only do what the client, architect, contractor specifies’ culture
lack of understanding of building technology (cf uncompleted fire stopping)
inspections (see the Edinburgh Schools Report)
and so many more …

Grenfell should be seen as a warning for the deregulation many would like to see following Brexit. The great repeal bill is set to repeal many of the health and environment EU regulations (those that that ‘hamper uk business’ but will prevent other Grenfells).

Amongst the many causes, it has been suggested the fire may well have started from a faulty appliance. How sadly ironic that it was the perceived EU over-regulations on safe & efficient kettles and vacuums that became a cause-celeb in last years Brexit referendum. (Who are the EU to tell us how safe our kettles and vacuum cleaners should be ….?) See George Monbiot Too often safety has been sacrificed to an agenda of deregulation backed by lobbyists 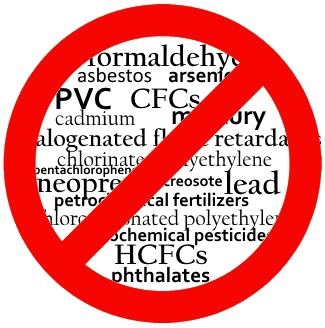 Moving in from the green fringe of the built environment sector, we have robust standards emerging containing material schedules built on the precautionary principle. (Here we can list the Living Building Challenge, WELL standards along with the Red List, Pharos, Declare and other lists.) Organisations and clients have their own schedules, for example Google’s Portico, British Lands Material Schedule. If such standards and red lists were adopted by the public sector, embedded into building regulations, then the cladding insulation at Grenfell would in all probability not have been permitted.

‘The precautionary principle implies that there is a social responsibility to protect the public from exposure to harm, when scientific investigation has found a plausible risk’

The precautionary principle states that if an action or policy has a suspected risk of causing harm to the public, or to the environment, in the absence of scientific consensus (that the action or policy is not harmful), the burden of proof that it is not harmful falls on those taking that action. The principle implies that there is a social responsibility to protect the public from exposure to harm, when scientific investigation has found a plausible risk. These protections can be relaxed only if further scientific findings emerge that provide sound evidence that no harm will result. (Wiki)

Lloyd Alter blogging in Treehugger illustrates the impact of the material used in Grenfell. What is sad is that this, to most, has come as a surprise.

What appears to have happened is that the Reynobond’s polyethylene core caught fire and the stack effect in the two-inch gap made it spread almost instantly. Apparently it got hot enough that the supposedly flame-retardant polyiso charred as well, putting out tons of smoke, possibly contributing cyanide and other toxic gases. The vinyl framed windows also melted, letting the toxic fumes into the suites very quickly.

As may be expected from media such as the Daily Mail, the green, carbon reduction, climate change agenda has emerged as a blame. Alice Bell writing in the Guardian(Don’t blame green targets for Grenfell) soundly kicks this into touch

But we do have a problem with many seeing building sustainability as simply being energy & thermal performance. The key message of FutuREstorative was to address the necessary shift in sustainability thinking, away from a blinkered focus on energy to one that embraces human and planetary health within a socially just and ecologically sound sustainability.  And … perhaps we should not use the word sustainability until we do.

Today, it is difficult to attend sustainability events where health and wellbeing is not a key theme and message, it is sad that this message is not percolating down through the long tail of construction where lowest cost is still prevalent. Lowest cost even at the high price of social and human life. (A mineral based insulation with a Fire Rating would have cost £2 m2 more than the polyurethane based, more flammable insulation used on Grenfell. It will be interesting to see any records of the value engineering exercise to arrive at this material choice, if indeed there was a recorded VE, and how the decision met the Social Value Act.

Time then for all in the built environment sector, the government, lobbyist, clients, designers, contractors and building operators to adopt precautionary principle thinking, particularly when human health hazards have been flagged by coroners reports, data, research and lessons learnt .

This can be voluntarily done now, today.  To wait years for outcomes from an inquiry and the regulation changes that will surely follow, changes that will tell us what we already know, is simply irresponsible.

View all posts by martin brown

4 thoughts on “Grenfell Tower and the precautionary principle.”